During the Guitar holidays or Bootcamp weekends, several special guest guitar teachers participate. Depending on the type of Bootcamp, we ask the best fitting teachers below from the Teachers Guitar bootcamp. Find out which one of these great players teaches at which event The Flemish Stef Delbaere has been the new guitarist of the Dutch blues rock band King Of The World for a while now. With this he follows in the footsteps of veteran Erwin Java. Not an easy job, but Delbaere immediately fulfills his role on the new album “Connected”.

Stef Delbaere is a 25-year-old guitarist, born in Ghent, raised in the village of Dikkelvenne. Through his parents’ extensive record collection, spotted with a lot of classical, jazz, rock and blues, he comes into contact with “From The Cradle” by Eric Clapton. He was later glued to albums by Robert Johnson, Elmore James, B.B. King and Albert King. After playing in a classic rock cover band, Delbaere goes to Codarts, the conservatory of Rotterdam.

In addition to his busy session of work and teacher at the Havo / VWO for Music and Dance in Rotterdam, Stef is also the permanent guitarist of Belle Perez.

Read all about Stef in Guitarist 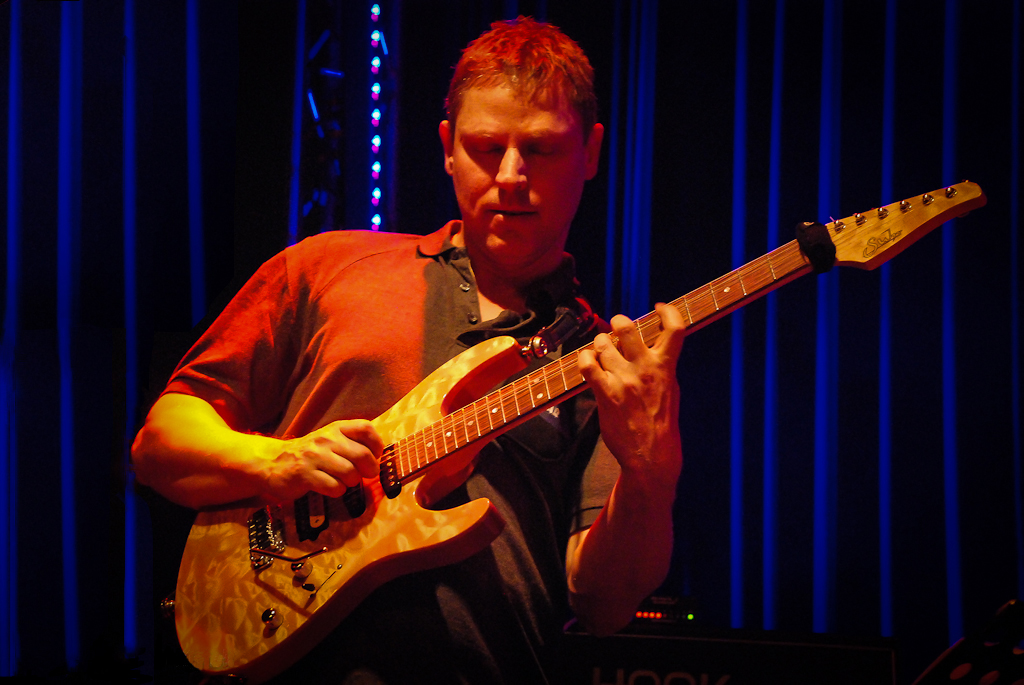 He Started playing at age 10 and at age 17, started his studies at the Royal Conservatory in Amsterdam for 6 years after that he studied for a year at GIT in Los Angeles
While in LA., recorded the fusion classic ‘Generator’ for Mark Varney’s legendary Legato Label at age 22. That cd also featured Scott Henderson, Frank Gambale, Carl Verheyen, Scott Kinsey. He performed two years in a row (2010 and 2011) at the Ziua Chitarelor Festival in Bucharest with Andy Timmons, Greg Howe, Guthrie Govan, Brett Garsed, Mattias Eklundh.
He also Teached and performed live for 4 days with Allan Holdsworth and Kiko Loureiro at the ESC 2011 festival in Sicily, Italy.
Richard is 4th price winner of the wordwide Yamaha Band Explosion contest at the Budokan Hall in Tokyo, Japan in 1989.
In 1993, out of 350 entries, Richard became the 2nd price winner of the Ibanez Guitar Award at the finale in Ahoy, Rotterdam.
In 2010, Richard headlined the ‘Meeting Of The Spirits’ festival in Leewarden, Holland together with Greg Howe and Carl Verheyen.
*Richard has performed on the Weaveworld trilogy from keyboard prodigy Lalle Larsson (ranking #3 best keyboardist in 2011 Keyboardmagazine polls)
He has toured throughout Holland and Germany in 2011 and 2012 with Guthrie Govan and Jose de Castro as a ‘rock-blues-fusion G3’ project. 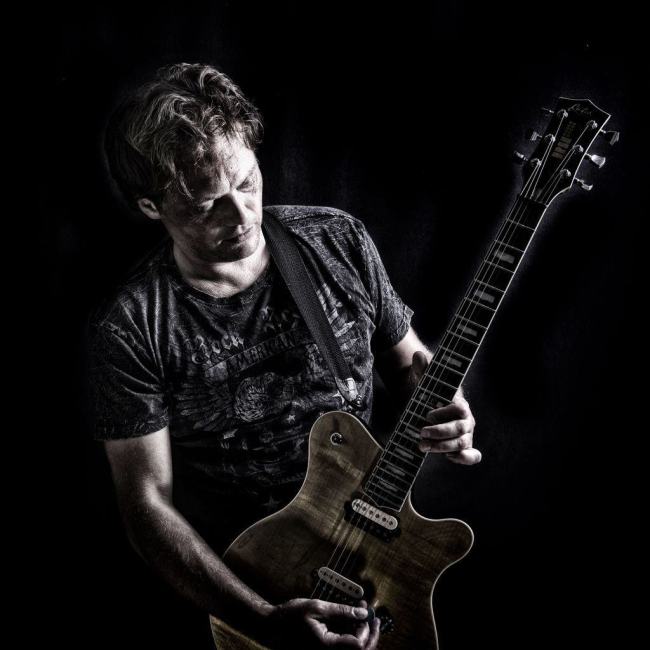 Ruben Hoeke started playing the guitar at the age of fourteen. His dream of ever strengthening the Dutch national football team disappears when he is accidentally confronted with the Guns N ’Roses classic‘ Sweet child o ’Mine’. Enchanted by the melody he immediately decides to exchange his football for an acoustic guitar. Nowadays you can place it in the list of musicians who have taken the Nederblues and Rock to a higher level. Since his first appearance in 1992, he has been touring the Netherlands continuously and playing on stages in Denmark, Germany, Belgium, Estonia, USA, Ireland, Luxembourg and Curaçao.

in 2008 Ruben is distinguished by Dutch fellow musicians with a “Devil” as “Dutch Best Guitarist”. He also receives an official Municipal Certificate for his “Great Ability as a Guitarist”.

Ruben has shared the stage with guitarists such as; Gary Moore, Jane Akkerman .. In addition, he has been asked to guide Beth Heart and Mick Taylor (ex RollingStone).

In 2006, Ruben founded the Ruben Hoeke Band. The sixth album of this formation will be released soon. 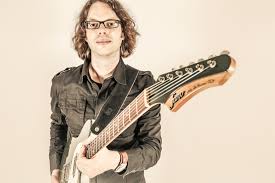 John F. Klaver is a Dutch guitarist, singer, composer and music teacher. He started playing the guitar when he was eleven, inspired by Gary Moore, Robben Ford and Jimi Hendrix. After graduating, he took private guitar lessons and music theory lessons at the University of the Pacific in the US. Back in the Netherlands, he was admitted to the conservatory of Amsterdam and received lessons from Jesse van Ruller, Martijn van Iterson and Eef Albers. In 2007 he started his own formation, the John F. Klaver Trio, which later became the John F. Klaver Band.

The first performance was the CD “Jetpepper”, which was released in 2008. The second album, “Coming Back For More”, followed in April 2011. The album was a great success and was voted Best Dutch Blues CD 2011. Well-known music magazines also noticed John and dedicated various articles not only to the band, but also to the amplifiers and effect pedals that John himself builds under the name ‘Klaver’.

John also had the honor of becoming the first and only Dutch guitarist to join the Jamtrackcentral team. His extensive technical training and teaching skills have already led to countless top-selling bluesolo masterclasses, both on this platform and in real-life workshops. Leif de Leeuw started taking guitar lessons at the age of nine. When he was eleven years old he attended a concert of Johnny Winter in Paradiso, this was the moment he realized that he wanted to play that music too. He devoted himself entirely to blues music and sought out everything from Robert Johnson, Joe Bonamassa, Eric Clapton and Stevie Ray Vaughan.

In 2009 he participated in the Sena Guitar Awards and he won it. In the following year he was asked by American guitarist Sonny Hunt to strengthen his band, The Dirty White Boys, in the Dutch tour. In 2013 Leif won the Sena Guitar Awards for the second time, his prize consisted of a Panucci guitar, built according to his wishes. He also started his studies in pop guitar at the Codarts Conservatory in Rotterdam.

In 2016 he was proclaimed ‘Best Blues (guitar) guitarist Benelux’ by guitarist de Gitarist. Leif has already been able to play together with many big names, including Tony Spinner, Stochelo Rosenberg and Henrik Freischlader. Leif has been influenced by artists such as Jeff Beck, David Gilmour, Derek Trucks, Larry Carlton, Joe Walsh and Jimmy Herring.

Maarten started playing guitar at the age of 11. After listening to ‘Just one Night’ by Eric Clapton.
He soon becomes fascinated by the Blues. At 16 he started teaching. He has been playing for 35 years now. and also teaches guitar for as long. In this 35 years his preference has changed to guitarists like Steve Vai, Edward van Halen, Allan Holdsworth and Frank Gamale. Despite that, his predilection for Blues has persisted.

You can ask him anything about the great Blues guitarists on earth, about slide and about acoustic blues.

Maarten has done a lot for TV and demonstrations at trade fairs. And regularly plays at the big stages in the Netherlands and abroad.

He is always up to date with the latest techniques. From Sweep picking to right hand tapping it is all covered
He has a completed education at the ‘Conservatorium van Amsterdam’
In addition to a good practice, he also gives music lessons at schools and he regularly performs on various stages.